Khadi is a fabric that may be worn in every weather condition. In the winter, it’s warm, and in the summer, it’s cold. Unlike other synthetic textiles, it is a body-friendly fabric that does not cause allergies or irritations. The dying and weaving of Khadi are done entirely by hand. Each khadi product is unique, with a distinct design and finish. Wearing a khadi makes you stand out from the crowd and provides you with a distinct look. The loom used to make khadi weaves the threads together in such a manner that maximum air can pass through, which is incredibly calming, especially in the summer. Khadi items are extremely robust and long-lasting, allowing you to express your fashion sense for a long time. It is an environmentally friendly product since it is manufactured entirely by hand and does not rely on any electric units or industrial procedures.

The dangers of synthetic fibers

With the never-ending debate over renewable energy versus fossil fuels and the damage they are causing to our environment, including unhealthy carbon emissions, ozone depletion, and, ultimately, the impending catastrophic global warming that environmental scientists warn us about, we must decide if we all want this planet to survive our excesses. According to a study, the textile sector contributes more to environmental deterioration than any other industry, accounting for more than 10% of worldwide carbon emissions. That’s a frighteningly large figure. All of these figures are wreaking havoc on the ecology and wreaking havoc on our surroundings.

Clothing manufacturing used to be simple yet time-consuming

However, as demand grew, enormous fabric manufacturing corporations arose, allowing for the mass manufacture of apparel textiles. Improvements to the production process were developed as the company grew. To keep the cloth from wrinkling and shrinking, chemicals were applied to it. Fabrics were dyed artificially and flame retardants were applied. Although artificial microfibers are less costly and easier to make in large quantities than natural fibers, they nonetheless pose health hazards to consumers. This health danger is not just experienced by customers; manufacturing workers are also exposed to it. Because of these synthetic fibers, the planet Earth is being poisoned irreversibly. According to reports, the apparel industry is responsible for more than 20% of global industrial water contamination.

Indian handloom is renowned for its beauty and diversity. Most people are mesmerised by the texture and colour of the most elaborate woven designs and needlework. Let’s take a look at the checkered history of this acclaimed art that is still holding strong in the face of numerous adversities and delighting textile enthusiasts the world over as we commemorate India’s rich heritage of handlooms on National Handloom Day (August 7).

The origins of handloom in the Indian subcontinent may be traced back to the Indus Valley Civilization, according to archaeological findings. Weavers received royal support with the rise of the Mughal empire, resulting in the invention of new textiles such as ‘Mulmul,’ ‘Benarsi Brocade,’ and ‘Jamawar,’ among others. As the world marvelled at the ability of Indian weavers, demand for Indian textiles soared by leaps and bounds. In the 17th century, India produced 25% of the world’s textiles, with Bengal accounting for more than 50% of textiles and 80% of silks imported by the Dutch from Asia. Following Aryan immigrants in the area, they acquired and refined skills for weaving cotton and wool, as well as dyeing and embroidering these materials. Spinning, weaving, dyeing, and other textile-related crafts flourished as a cottage industry. However, the entry of the East India Company signalled the end of the Indian textile industry. The weavers were obliged to sell only to the British at exceedingly cheap prices, thereby putting them out of business.

The liberation war resurrected the Indian handloom industry, with Mahatma Gandhi leading the Swadeshi movement. In no other country has anything as fundamental as one’s clothes or a simple act like cotton spinning gotten so entwined with a national movement as it has in the United States. The modest charka (spinning wheel) and khadi became a powerful emblem of independence, self-determination, and national pride. Following independence, the Indian government took many measures to revive the handloom industry. In 1953, India’s Parliament approved the Khadi and Other Handloom Industries Development Act. In 1955, the All India Handloom Fabrics Marketing Cooperative Society was formed to promote the sale of fabrics produced by handloom cooperatives across India. Pioneering personalities like Suraiya Hasan Bose, Pupul Jayakar, and Laila Tyabji are also responsible for the resurgence of handlooms in India. Designers such as Ritu Kumar, Sabyasachi, Sanjay Garg, and others have given handloom weaves much-needed attention not only in India but throughout the world.

The Indian handloom sector now employs over 4.5 million people, both directly and indirectly, and is the country’s second-largest employment after agriculture. There are around 2.4 million looms of various types. In the fiscal year 2019, India’s handloom exports were US$ 343.69 million. With an anticipated purchase of US$ 93.94 million in FY19, the US was the largest importer of Indian handloom items, followed by the UK, Italy, and Germany with US$ 17.77 million, US$ 16.47 million, and US$ 14.65 million, respectively. Handloom production accounts for around 15% of total fabric output in India. India produces 95 per cent of all hand-woven cloth in the world. 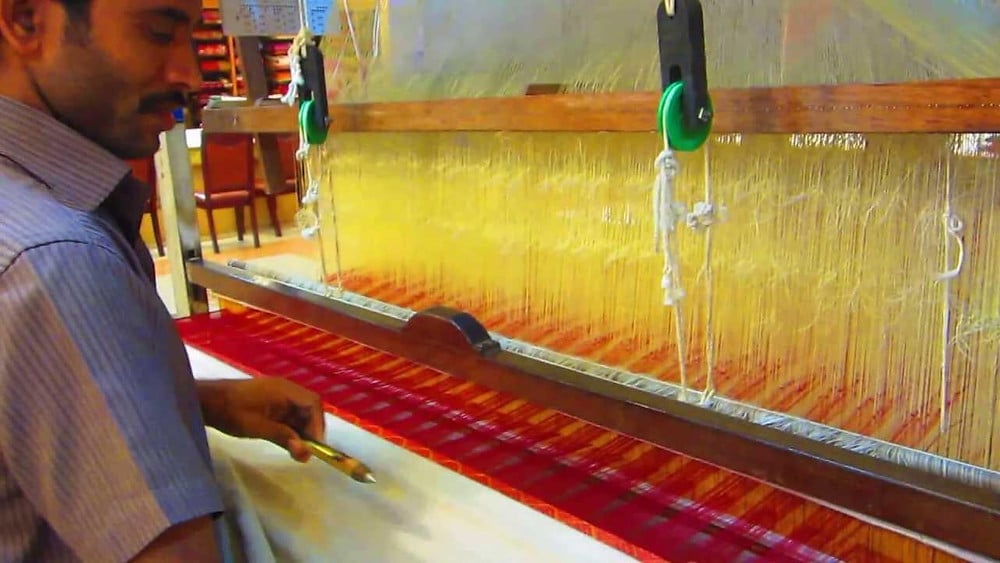 Every handloom product, whether it’s dazzling silk or feather-light cotton, is distinctive. Every handloom saree is filled with the artistry of every talented worker. It is certainly true that every carefully constructed handloom product always triumphs over the machine-made in terms of creativity. Although we are aware that they are more expensive than comparable machine-made things. However, this is due to the amount of time and talent that goes into weaving a product, as well as the craftsman’s hard work and effort. Depending on the design, weaving a whole product might take anywhere from 20 days to two months.

It takes a long time to do by hand and is not a fast-paced task. The majority of handloom items are crafted with naturally occurring raw materials and colors. They’re not only good for the environment, but they’re also good for your skin on hot summer days. When you sweat, the natural raw ingredients have no negative impact on your skin because they are chemical- and toxin-free. It takes a lot of work and time to find and process the basic material again. The nicest thing about handloom items is that they are long-lasting and resilient because they are made of natural fibers. These handloom items last for decades because of naturally sourced basic ingredients. Handloom sarees are also back in style! Indeed, many designers are returning to their roots and choosing handloom items for their collections. A handloom piece’s individuality is unquestionably uncommon and exquisite.

We Love to stay in touch

OUR PRODUCTS ARE ALL-NATURAL FABRICS WOVEN TOGETHER WITH NATURAL FIBERS. WE DON’T USE ANY KIND OF SYNTHETIC FIBERS IN ANY OF OUR HANDMADE PRODUCTS. NATURE FRIENDLINESS IS MAKING US THE ONE AND ONLY RESPONSIBLE BRAND FOR HANDMADE CLOTHING IN INDIA FOR THE WORLD. WE ARE ONE OF THE TOP HANDMADE BRAND WHICH YOU CAN CHOOSE FOR ECO-FRIENDLY CLOTHING AND WE HAND WEAVE ALL OUR PRODUCTS MORALLY AND RESPONSIBLY. OUR MOST OF THE DESIGNS ARE CONTEMPORARY DESIGN TO SUPPORT THE SLOW FASHION UNDER OUR BRAND “HANDLOOOM.COM”. MOST OF OUR HANDMADE PRODUCTS COMES WITH “HANDLOOM MARK” & SILK PRODUCTS COMES WITH “SILK MARK” PROVIDED BY MINISTRY OF TEXTILES, GOVT OF INDIA

The ‘Handloom Mark’ is a symbol of the rich legacy and tradition of Indian Handloom textiles. The Mark is aimed to promote the brand of handlooms and develop a niche market for the handloom textiles with a distinct identity. The Mark is also a symbol of social cause to promote the livelihood, welfare, and growth of more than 6.5 million weavers. This will enable the age-old traditional handloom industry to cherish their skills/craftsmanship and sustain in the competitive market.

“Silk Mark ” is a certification mark in India for silk textiles. The mark certifies that the piece of textile which bears the mark is made of pure natural silk. The certification is managed by the ‘Silk Mark Organisation of India’, a society set up by the state-controlled Central Silk Board of India